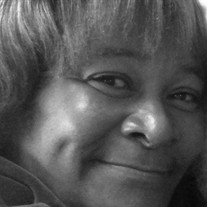 Debra “Debbie” Mack (Neal) was born on September 2,1955 in New York, New York to the late Fredrick and Pearl (Hughes) Neal. Debra attended the Global Business Institute in Queens, New York. After graduating, she relocated to Springfield, Massachusetts where she worked as a sales manager. Debra soon decided to pursue her passion. She poured her love and dedication into others by providing care for the residents of Crescent Hill, a long-term care facility. Debra also committed her time and her talents serving as an active member of the Parent Teacher Organization at Indian Orchard Elementary School. The depth of her love was demonstrated in her devotion to a 36-year marriage and her care for her 8 children, 28 Grandchildren and 8 Great Grandchildren. Debra was an advocate for her family and for her community. She stood for what she believed and fought for what she valued. She did not grow weary in doing well. She served others until her final days as an active supporter of The Keys Rites-of-Passage program, supporting boys being groomed to be tomorrow’s leaders. Our beloved mother always found time to bless friends and family with her presence and with her support. Whether in person or through a phone call, she ensured her love, her encouragement, and her support were always felt by those around her. Debra left a powerful impression on all who had the pleasure to meet her, speak to her, and befriend her. It did not matter if one engaged her for or just a moment or new her for a lifetime, she was unforgettable. She was unforgettable because no matter who a person was or where they came from, she would not give up on anyone. This is the legacy she leaves not only to those who knew her well, but to all whom she encountered. Our dear mother will be greatly missed. On March 4, 2019, at the age of 63, Our beloved Debra passed from this world to her rest at Northside Hospital. She is preceded in death by her sisters Vermeil Neal and Lynette Neal, her brothers Fredrick Neal, Jr. and Joseph Neal. She is also preceded by her late husband Raymond Mack, Jr. Debra is survived by her daughters Patrice Mack of Atlanta, Georgia, Lakisha Wheeler of Charlotte, North Carolina and Deondra Mack of Queens, New York. She is survived by her sons Raymond Mack III of Springfield, Massachusetts, Jemar Mack of Hinesville, Georgia, Benny Quetell of Queens, New York, and Anthony Mack and Travis Mack both of Brooklyn, New York. A celebration of her life is will be held on Saturday, March 16, 2019, from 3:00 pm to 5:00 pm at Gregory B. Levett & Sons, located at 4347 Flat Shoals Pkwy, Decatur, Ga 30034. Pastor Mason West III will officiate the ceremony. All are welcome to attend and celebrate Debra’s life. Flowers and condolences may be sent to P.O Box 3337 Atlanta, Ga 30302.

The family of Debra Mack created this Life Tributes page to make it easy to share your memories.

Send flowers to the Mack family.