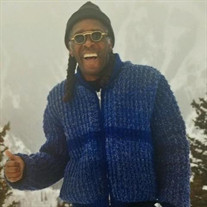 A memorial service to celebrate the life of James W. Jackson will be held at 1:00 PM on Saturday November 18, 2017 at Grace United Methodist Church. 3145 Washington St SW, Covington, GA 30014. Obituary James W. Jackson, AKA “Jimmy” AKA “Jai” went to be with the Lord Tuesday, November 14th, 2017 at home in Oxford Ga. surrounded by family. He was born Sunday, May 6th,1951 to James A. and Almarie Jackson in New Rochelle, NY. He is the 5th of 7 children. Jai’s biological mom passed at an early age and the family eventually settled into a new home (171st Place) in Jamaica, Queens NY. Jai was already a shoe shining, money making, I’ll do it my way, entrepreneur. Once out of school Jai took on a number of jobs from “Orkin Man”- Courier. He worked at the Fountain Head, Catering in New Rochelle NY even though the family moved to Queens NY. Jai added to his life in 1972 by marrying Alma Jane Jones and bringing a beautiful baby girl into the world “Jayyidah” .The Jackson’s expanded. Jai’s love for animals led him to own dogs and train horses. Roller Skating at Metropolis turned into dancing with the stars before the TV show was ever thought of; Jai taught Stevie Wonder to rock steady on the wood. For a season he was a limousine driver whose charming personality won him center stage with so many in show biz such as Regina Bell and Teddy Riley. This guy knew how to shine his light just right in a huge ballroom or a basement party. Jai also had the knack of making his life interests into career choices. Driving up and down the east coast was his love. He knew the interstates, routes, rest stops and backroads like the back of his hand, no matter what city. This amazing skill in the days of emerging GPS use was OUTSTANDING. His passion for driving became, Jai’s Unlimited Services, shipping and hauling fine art and antiques. He was preceded in death by his Mother Almarie Jackson, father James A. Jackson, stepmother Betty Jackson and stepmother Evelyn Jackson. He is survived by Daughter Jayyidah (Jada) Gardner, grandson: Jamal Jackson and Jayrell Gardner, granddaughter Kaylah Gardner. Siblings Kenneth (AJax) Jackson, Ida Jackson, Doris Williams, Diane Rungu, H. Timothy Jackson, Belinda Hickson, nieces: Kecia,Sarai, Alida, Tonya, Nicole, Leah, Adhiambo (Adhi), nephews: Jechiel, Malik Little, Khalif, Malik Jackson, and David along with a whole host of great nieces, great nephews, in-laws and adopted family. Jai is remembered as funny and honest. He loved and inspired so many from all walks of life, young and old. Jai could live life with little money like a king. He often said “I’m God’s favorite.”

The family of James W. Jackson created this Life Tributes page to make it easy to share your memories.

A memorial service to celebrate the life of James W. Jackson...

Send flowers to the Jackson family.