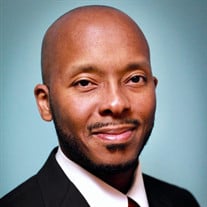 Kenneth Saunders III, of Stone Mountain, GA passed April 18, 2020. Kenneth Saunders III was the kind of friend who knew the best new place to eat, and had the technological skills to find a coupon on his cellphone to slice a couple of dollars off the tab. Then, after the meal, he would send you the selfies he took along the way. He was civic-minded, too, making a name for himself as an optimistic peacemaker in the sometimes heated world of neighborhood politics, especially in sprawling Dekalb County, east of Atlanta, where he lived. “I don’t think he had biased eyes in any direction at all,” said Kenneth Saunders Jr., his father. “You have the issues that come between the white and black politicians, but he had friends on both sides. Even if he was opposed to them, he would work with them.” Mr. Saunders was born on July 2, 1976, in New Orleans. His father moved the family to the Atlanta area when his son was 4. From an early age, Mr. Saunders had a special aptitude for data, computers and music. He played the trumpet, and was a member of the band that performed during the 1996 Olympic Games in Atlanta. “He’s still got the uniform in his closet signed by Wynton Marsalis,” his father said, referring to the musician. Mr. Saunders graduated from Redan High School and for three years studied civil engineering at the Southern Polytechnic College of Engineering and Engineering Technology at Kennesaw State University before leaving to start his own technology and travel businesses. Politics drew him in early. At 18, he joined the board of the Hidden Hills Civic Association, which represents about 1,650 homeowners in the community near Stone Mountain, Ga., where he lived. He would become its vice president, as well as the president of the South DeKalb Improvement Association and a member of the DeKalb County Zoning Board of Appeals. He had his eye on higher office but mostly, he just wanted to make the world better for the people around him, said Kathryn Rice, who knew him for 20 years and had worked with him on several civic projects. “A lot of people who run for office have very sincere feelings before they get in, but once you get in, the system can fold you up,” she said. “That wasn’t Kenneth. He was a peacemaker who always seemed to work toward what was best for everybody.”

Kenneth Saunders III, of Stone Mountain, GA passed April 18, 2020. Kenneth Saunders III was the kind of friend who knew the best new place to eat, and had the technological skills to find a coupon on his cellphone to slice a couple of dollars... View Obituary & Service Information

The family of Kenneth Saunders III created this Life Tributes page to make it easy to share your memories.